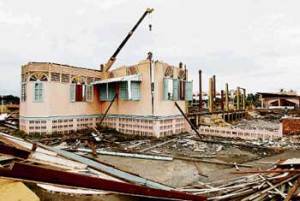 KUALA TERENGGANU: People here are saddened by the tearing down of the Masjid Raja in Cendering which they consider a heritage site.

While details are a little sketchy, the State Museum shows the mosque was built in 1951 and was originally a house belonging to a Tengku Seri Wa Raja Tengku Abdullah, who donated it for the very purpose.

Tengku Abdullah is a member of the royal family.

The 60ft by 70ft mosque itself was built using cengal wood while the roof has a Limas Bungkus and Limas Belanda design, while its walls incorporate a kembung design said to be rare in homes these days.

The mosque itself was constructed during a gotong-royong by villagers in the area.
In 1985, it was named an exemplary mosque.

A museum spokesperson, who only wanted to be known as Rashid, said developers should have built adjacent buildings if authorities felt the need to develop the area rather than demolish the mosque.

“If that was not possible, maybe they should have considered relocating the old mosque to some place else.

“This is our asset. It is part of our history, which gives us our identity. The tearing down of the mosque is like we are blotting out our history and tradition.

“Are we to appreciate such things only when it is gone?” he told the New Straits Times, adding that authorities should have looked at the Jamhuriah mosque in Kuala Besut to see how the heritage was preserved despite renovations done to it.

A close source however informed the NST that he knew of someone who bought a few walls containing carvings of Terengganu motifs found in Masjid Raja from the mosque’s committee.

He claimed the walls were bought for RM8,000 about a month ago.

The mosque committee chairman, Yong Embong, 74, said only a quarter of the original mosque was left prior to it being torn down as a majority of segments had to be replaced due to termites.

He, however, said the roof was damaged in the demolition.

“If possible, we wanted the new mosque to be built adjacent to the Masjid Raja, but there was no land. And if we left the mosque as it is, it will just rot away.

“We had no choice, but to demolish it and we did so with a heavy heart as we have come to appreciate its heritage,” he said, adding the new mosque would incorporate some of the designs of the previous one.

The walls, Yong explained, had to be sold as there were no takers when it was offered to other mosques.

The State Religious Affairs Department commisioner, Datuk Shaikh Harun Shaikh Ismail, said the demolition of the mosque was to make way for a bigger mosque to be built, although he was not aware of the history behind Masjid Raja.

The new mosque, which has been in the pipeline for more than a decade, is scheduled to be completed in 2010 and can accommodate 2,000 people.

“We are considering using the old roof for the new mosque and might donate the other parts for a separate mosque,” he said, adding the construction of the new mosque has already begun.